Want To Play A Puzzle Game?

I should have recognized the picture because it's on the cover of my book that I wrote back in 2009. And yes, we want to see more puzzles!
.

LOL yes, you should have. That is

I was way off... I was thinking it was the famous couple standing in a lot with trees and a ghost image was behind them. That pic is also in my book.

Lol, Yay me! I spent the whole day on and off looking through ghost photos all over the internet. The more puzzle pieces helped, lol, I had a better idea of what I was looking for.

A new puzzle is up.... remember if you need to resize the picture, use the scroll wheel on your mouse while pressing the Ctrl* button.
This piece is worth 9 points so no hits : 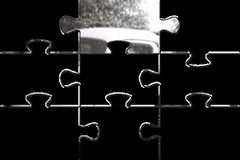 Ok I think it might be a car LOL

It looks familiar, but I can't remember where I saw it. I just scrolled through about 1,000 images on Google, trying to locate the pic... ARRRGH! 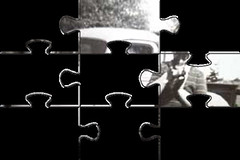 Looks to me like it might be a ghost captured on film in a car?
Can't wait to see the whole picture! 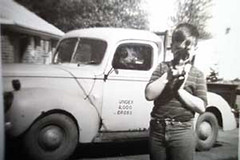 9 points and I am impressed!

Good job Dazzled Dad!
Not sure how to interpret the picture though. Is there a ghost in the drivers side window? Or something eerie in front of the boys face?
Or something else altogether? I'm going to have to try enlarging the picture.

Here it is enlarged and slightly enhanced...

The thing in the trucks window? To me, it looks like a Pitbull with his mouth open.

Maybe it's the slightly visible face near the middle of the windshield?

I see the dog now that you mention it... but it looks like a living dog sitting in the truck, to me.

And I see an image on both sides of the middle of the windshield.

And maybe the black thing in the boys hand is a action figure.... but looks creepy to me.

Now I'm thinking the little boy is holding a pet rabbit or a cat?

This is what I see

I was thinking if the boy wasn't holding something, he was wearing a glasses/mustache face mask lol

Yes it is the ghost dog. Good job with the Mr. Misters too, Mrs frootloop

"This photo was taken in front of my childhood home in the summer of 1966. It was taken by my then seven year old brother with a very inexpensive Diana camera using 120 film.
In the photo my older brother is holding our kitten with our fathers truck in the background. As children, we never noticed anything unusual about the image. It was put away in a drawer with dozens of other snapshots and forgotten.
Almost 20 years later my brother (the one that took it) and our friend who grew up across the street from us were looking at a stack of photos reminiscing. Our friend asked "Who's dog is in the truck?". The problem was we didn't have a dog at that time, and the only two dogs we did have while growing up were both fawn colored boxers. None of us recall a white dog in our neighborhood. Also, we were not allowed to play in the truck and certainly wouldn't have let a strange dog inside it.
The strangest part of this is that the dog is transparent - the rear window can be seen through the dog's head. We asked my mother (our father had died years earlier) about the dog. She remembers that they bought the truck from a chicken rancher who had a large English sheepdog type of dog.
The dog is obviously looking at the boy holding the kitten with a great deal of intrest, just as a "real" dog would. This image is so clear that even very small children notice it without prompting. Also please note that the black circle around the dog's eye is the side mirror on the truck.
I hope you find this interesting, it still gives me chills up my spine after all these years".
http://www.castleofs...s/ghostdog.html