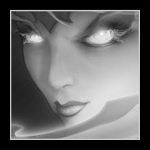 This Occurred October Of Last Year. On The 26Th. Ty Dalura.

Sometime ago my favorite metaphysical shop, The Triple Goddess, closed down. Gone, after decades, just gone. There is nothing there now but an empty lot. Boo Hoo.  I found another shop on the northside of the city that was extremely satisfying but there was a fire.  Fortunately they have moved into a larger space but it took awhile to reopen.  In the meantime I was on the lookout in the surrounding area for another shop. And I found it on the eastside.

This shop is located in a stripmall that it shares with a wide variety of other professional business'.  I consider this shop "highend" for a multitude of reasons but basically because it is brick and mortar, retail and offers professional metaphysical services including classes of all kinds. It has few if any books but had exactly what I was looking for: minerals, stones and gems.

On the mainwall of merchandise I thought I had backed up on to something or someone. (The aisles are less than three feet across) When I straightened to excuse myself I found no one behind me and no merchandise that I had run into it. I was surprised and turned a full circle but the only one I noticed was a sales clerk watching me and that was it.  There was no one closeby.

I let the experience go and continued on my way down that thirty foot wall, around the corner and half way down that wall I was sexually assaulted by someone/something that I cannot see. There was no violence to the assault, but it was an unsolicited advance.  As I straightened, I didn't know what to do and I grew angry..maybe because I found myself in a new situation that I was not prepared for.  I had to calm myself down and in order to do that, I had to have a plan of action.

This was it:  Touch me one more time MFrr and I'll go to the front of this shop and address the situation outloud!  And I would have, that is how angry I was.  I stood there waiting and calming myself while pretending to look at the merchandise. There was no further contact and so I moved on only to stop when I reached the doorway to the back of the business because that is where I found it.

It had left the retail section, crossed the hallway and was in a blue room, which obviously was a reading room and we had a standoff until I moved on but I was drawn back to the doorway.  It had left the blue room and moved down to the end of the hall and I got the distinct impression that it was making faces at me. I didn't leave the shop right away.  I waited for it to enter the front of the shop again but it didn't.  The sales person was trying to engage me but I couldn't focus on her or anything else.

I thought about it all day long and later that evening I began correspondence with the owner of the shop. I don't usually address this type of thing when it comes to public buildings but I had never encountered something like this before and the shop had mostly women in it.  I wondered how long it had been going on, that and the fact that there were security cameras throughout the building.  It helped prompt me to act.

She got back with me a couple days later explaining that she had examined the security footage and told me what she knew about the place and verified that others had reported their clothing being tugged on (I bet they had been) and that she was certain that it was a young boy that had been killed in a farming accident fifty years ago and that he kept company with her twelve year old son.  She apologized for him upsetting me.

Her write off annoyed me as much as the assault had and I asked her if she was not a bit concerned as a woman about how other women in her shop were being treated? (No doubt this smart butt prayed on others in her store) . Not to mention that her son was hanging out with it.  I also told her I wouldn't be giving the name of her shop out and I would not be back.  As far as I was concerned I had done what I could and I would do it again if I thought others were being harmed but you can only do so much.

It was late spring when I sent her address and contact information to a parapsychologist I had been corresponding with and following for about a year, just in case he was in need of some field work and left it at that. The owner has since contacted me to come back to her shop but there is nothing more that I can do and I deleted her invitation.

And that is the truth of it.

You would have been mad as hell after you got over your surprise.  lol

Thank you for reading about the occurrence.  Most people don't get it but I do.  I'll bet you that those that reported it to her were few and far between since it's such a personal experience but more than likely most women ignored it like I had in the beginning.  That threw me into a fury!  It's not that I'm brave, paranormal events have been going on most of my life and you get use to it and in most instances roll with.  What else can you do?

wow that is not great for that woman's business or her son. and not a great response to you. Don't blame you for not wanting to go back, not the type of person you want to associate with.