Interesting they found a "cube" of of Zoroastrian.  Can you think of any other religions that involve gathering around a cube?

"In Zoroastrian cosmology, the head of the manifested universe is Ahura Mazda, the "Wise Lord." He is the universal and pervasive source and fountain of all life. But behind or beyond Ahura Mazda is Zarvan Akarana, Boundless Time and Boundless Space, the unmanifested absolute from which the manifested Logos, Ahura Mazda, came forth.
Ahura Mazda is depicted in the Zoroastrian scriptures as a kind of trinity: "Praise to thee, Ahura Mazda, threefold before other creations." From Ahura Mazda came a duality: the twin spirits of Spenta Mainyu (the Holy or Bountiful Spirit) and Angra Mainyu (the Destructive or Opposing Spirit). The twin spirits are popularly thought of as good and evil, but rather they are two principles that represent all the opposites of life. In her lecture on "Zoroastrianism," Annie Besant has this to say of them:"

The Cube of Zoroaster, or ‘Ka’be-ye Zartosht,’ is a large rectangular monument built on a triple stair base. It measures 40 feet (13 meters) high and is made from local limestone. There is a stairway of some thirty steps that lead to the only entrance to the building, which is in the shadow of a mountain. On the side of the ‘cube’ there are niches which served an unknown purpose. The structure has been dated to the Achaemenid Empire (553-330 BC). It was possibly built when the Emperor Darius Imoved from the first Achaemenid capital, Pasargadae, where there is an almost identical building to the ‘cube’. 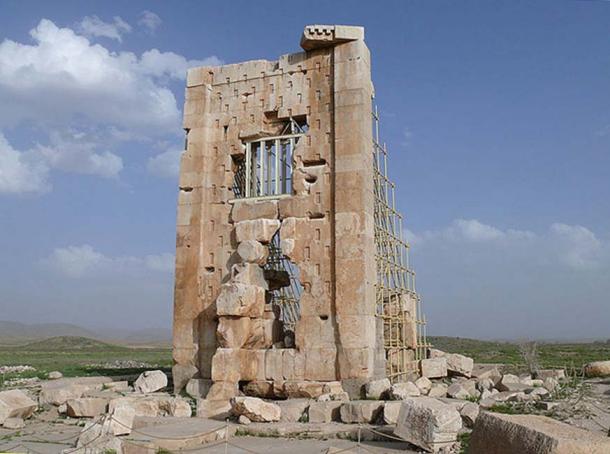 Old Achaemenian temple at Pasargadae, said to be the "Prison of Salomon" (Zendan-é Salman). (dynamosquito/ CC BY SA 2.0)

The structure is named after the semi-mythical founder of the Zoroastrian faith, which was once the official faith of the Persian Empire and still has a small number of followers in India and Iran. However, studies have shown that the structure was not always known as the Cube of Zoroaster and this name has only been used by locals since the 14th century. The monument was known by another name during the Sassanian Empire(224-661 AD) and why it has come to be known as the ‘cube of Zoroaster’ is a matter of conjecture.   https://www.ancient-...roaster-0011382

Cool, thank you for posting it,