Thought's On This One?


37 replies to this topic

Yes on the chair. I thought pillows or something laying on the chair also,but I see a face an arm&leg or so that's what it looks like. I rekon we all we see different things. Thank you for the reply

I don't see a face. The pic is too small and grainy to make out anything.

Which photo are you talking about Mac?

It's right underneath gravestone in dirt area on right side corner.

Try blowing it up. I went in to try and circle it on my own computer and when I tried to post it again it said file to big ugghh

I can spot lots of faces if I look long enough. Seems to be a classic example of pareidolia.

Look at long thick black area (line) on right side going all the way down to the bottom follow that to dirt area...it's right below it.

Here you go,is  this what you mean. 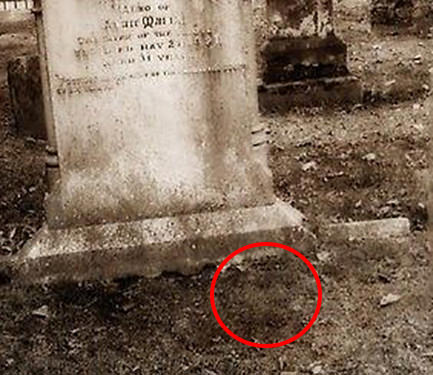 Just pareidolia IMO. And when you blow up/zoom smaller photos, you add to the distortion and pixels

I was gonna suggest it was all Pooky. He gets around.

Well it's got 2 eyes a nose,mouth and teeth...good enough for me

I was gonna suggest it was all Pooky. He gets around.

Try blowing it up. I went in to try and circle it on my own computer and when I tried to post it again it said file to big ugghh

It seems to be just pareidolia.


"I took this picture of my husband fishing at a very remote lake, Dorothy Dunn, in northern Wisconsin," says Elizabeth. "The lake has no boat launch and no homes are on the lake. We had to hike in to the lake through brush and weeds. "I took the picture in early 1990s. It wasn't for some time after I had it developed it that I realized it appears that a young girl, possibly wearing a pinafore and bonnet, is off to the right of my husband. Everyone was so intrigued by the photo.

Above is the story attached to photo.

I am usually one of the first to want to say "ooohh!!  I see it!", but as soon as I saw this picture the first thing that came to mind was that what appears to be the "bonnet" of the person is actually the light wood inside the trunk of a tree that has been cut down, and what appears to be the dress is actually a tarp that was maybe draped over a pile of firewood that was being cut from the tree that was felled.  Of course, I could be completely wrong, but that's how it hit me when I looked at this for the first time.  With other photos I have gotten the feeling that I am looking at something I was not supposed to be seeing, but not so with this.  Not that that's any indication either, it just didn't strike me as being paranormal.