The Ghost Of Elva Zona Heaster 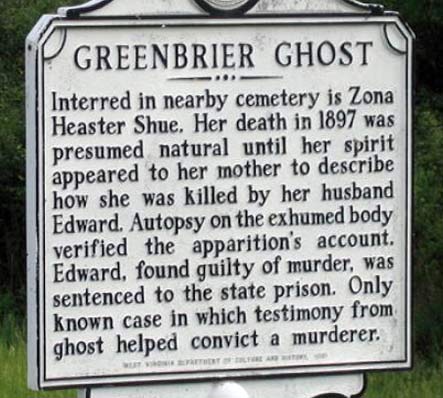 I think this picture might cover this topic nicely

BUT.... here is the story behind it!
Source

Elva Zona “Zonie” Heaster is one of the few documented, ghostly detectives.

According to her mother – and the jury at Trout’s trial – Elva solved her own murder.

Elva was one of nine children in the family, and the elder of two girls. (Elva’s sister Lennie was born seven years after Elva.)

Elva was also one of the county’s most beautiful young women.

Her first boyfriend was Albert Carr. (He later married – twice – and named his daughters Elva and Zona. So, it seems like he never quite got over Elva Zona Heaster.)

Elva may have married George Woldridge. They had a baby boy in November 1895. The child may have died or been raised by someone else. The records aren’t clear about the baby’s fate, if George was Elva’s husband, or what happened to George.

A year later, Elva fell in love with Erasmus Stribbling “Trout” Shue, who’d been born in 1861 in Augusta, Virginia. (His parents were Jacob and Elizah Shue.)

Evidence suggests that “Trout” was a heart breaker – and perhaps a wife-murderer – even before he arrived in town and courted Elva.

Trout had already been married to Allis (or Allie) Estilline Cutlip, Lucy A. Tritt, Ellen Estilline Cutlip, and Annie Williams. (Ellen and Allis may have been one person. Like many records of that time, spelling errors are commonplace.)

His first marriage (to Allis) ended in divorce, with cruelty cited.

His second wife (Lucy) died suddenly, hit on the head “by a falling brick.”

It seems as if most of Trout’s neighbors believed he’d killed Lucy, but they had no proof.

The other one or two wives… I haven’t found records for either of them, yet.

So, Elva was Trout’s fourth or fifth wife. (Apparently, his goal was to marry seven women.)

Trout was described as a drifter, and worked as a blacksmith near Elva’s home.

The couple married on October 20th, 1896, about a year after Elva’s baby (with George Woldridge) had been born.

From the start, it appears that Elva’s mother was uneasy about the ever-so-charming Mr. Shue.  In fact, some accounts say that Mrs. Heaster hated Trout on sight.

Then, on January 23rd, 1897 – shortly after the couple had been married just three months – Trout sent a boy to the Shue house on an errand. The boy found Elva, dead at the foot of the stairs.

By the time the doctor arrived, Trout had already brought Elva upstairs to her bed, wrapped her neck in a bright-colored scarf, and generally prepared the body for burial.

(The reference to the scarf, and the odd, flat appearance of Elva’s hair, face, and neck, suggest that the photo – near the top of this article – was taken after she’d died. Postmortem photos were common in some regions, as a memento of the deceased.)

Because Trout seemed so distraught at his wife’s death, the doctor did only a cursory examination. He decided that Elva had fainted and fallen down the stairs to her death.

(Only later were questions raised about the blood near her body, and the possibility that she was pregnant when she was killed.)

Elva was buried in an unmarked grave at Soule Chapel cemetery.

About a month after Elva’s death, over a period of four nights, her spirit appeared to her mother, Mrs. Heaster.

Elva’s mother said that Elva looked like she was “flesh and blood,” not a ghost.

Elva explained to her mother that Trout had killed her. To confirm that she spoke the truth, Elva told her mother several things that her mother could not have known at the time . And, to demonstrate that Trout had broken her neck, Elva (the ghost) rotated her head in a full circle.

Elva’s mother visited the sites Elva had named, and verified the details that Elva had shared. Everything confirmed that Elva’s spirit really had visited her mother.

So, Mrs. Heaster went to the county prosecutor and convinced him to open Elva’s grave for an autopsy.

As expected, it turned out that Elva’s neck was broken, but her windpipe had been crushed as well. She hadn’t been the victim of a fall.

Elva’s mother’s story never wavered. She always insisted that her daughter’s ghost had appeared to her, and revealed the murder.

The story is so odd, I believe her.

Where is Trout Shue buried?

His body is in an unmarked grave near West Virginia St

Cool, thanks for posting it. I saw on Unsolved Mysteries something on this idea. It was about Teresita Basa, Chicago, Illinois. She died the night of February 21, 1977. She immigrated from the Philippines in 1929 and worked as a respiratory therapist at Edgewater Hospital in Chicago.

More than five months after the murder, Teresita's coworker, Remibias "Remy" Chua, another native from the Philippines, and her husband Joe contacted detective Joe Stachula, claiming to have information about the murder. Remy told Joe that shortly after the murder, she began having visions and dreams in which Teresita appeared to her, begging her to go to the police and tell what had happened to her. One night, Remy took a nap at home; according to Joe, she began speaking in another voice. The voice said that she was Teresita Basa. She told Joe that her killer's name was Allan Showery. The voice claimed that Showery was an orderly that worked at the hospital. She urged Joe to go to the police. However, when Remy woke up, she claimed to have no memory of what had happened. Joe decided, at first, not to go to the police.
Then, the voice possessed Remy a second time, asking Joe why he did not go to the police. He said that he had no evidence against Showery. The voice then told Joe that Showery had taken Teresita's jewelry after the murder and given it to his girlfriend.