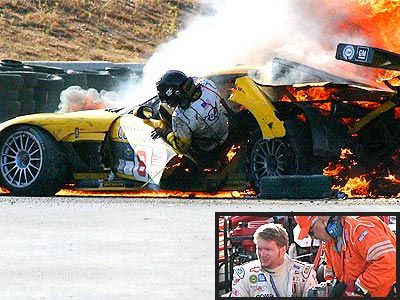 Dale Earnhardt Jr. is still not sure about seeing a spirit, but he believes he felt one. In 2004, Earnhardt was behind the wheel of a Corvette in a sports car event when he crashed and his car almost immediately burst into flames. He made it out OK, but he’s confident someone pulled him out of the fiery wreck, despite the video clearly showing he was alone.

“When I wrecked in the Corvette in 2004 at Sonoma — it caught fire — somebody pulled me out of that car. And I thought that it was a corner worker because I felt somebody put their hands under my armpits and pull me out of the car. I didn’t get out. I don’t have any memory of myself climbing out of the car. And I remember sort of moving like in motion going to lean forward and try to climb out of the car, and then something grabbed me under the armpits, pulled me up over the door bars and then let go of me.

“And I fell to the ground, and there are pictures of me laying on the ground next to the car. I know that when I got to the hospital, I was like, ‘Who pulled me out of the car? I gotta say thanks to this person,’ because it was a hand! It was physical hands grabbing me! I felt it. And there was nobody there.”
When he was told there was no one there helping him, his response was, “Bull(expletive).” But he said he clearly remembers that’s how it happened.

I was a big fan of Dale Sr.  I find it odd that I am not surprised that he was there looking over his son!!!

Yes they were some of the comments on YouTube that it was his father. The picture does look as though some one has pulled him out backwards.

I looked at the photo and the video. I wish there was a close-up video of the same but I can definitely see how he came out of the car and....yes....it's WEIRD....like an invisible force pulled him out!

Yes, he seems convinced he was pulled out too! Very strange!