Ghost Of 'bride' Seen Floating Through Building Site At 2Am


13 replies to this topic


A security firm boss was left petrified after CCTV cameras picked up a chilling image of a ghostly figure walking across a building site in the middle of the night.

Adam Lees, 47, was alerted after a motion sensor camera picked up movement at the construction site in Birmingham city centre at 1.53am on Tuesday.

He said he checked the security alert on his laptop and spotted the eerie figure of a woman wearing a white dress walking past building materials on Sherborne Street.

But when he instructed a full patrol of the area just three minutes later, security guards found it all clear and with no sign of any intruders.
Adam, who is managing director of Limitless Security and lives in Walsall, West Mids., said: “I have no idea what it is but its freaked me out that's for sure.

"We provide security for hundreds of building sites across the Midlands. If anything moves on our sites a camera takes a picture - it works on infrared - and it alerts one of our guards.

"In the early hours of Tuesday we had an alert to say something had been picked up at the site in Sherborne Street.

"The images come through to my laptop, so I checked and saw that image. I thought it looked a bit weird at the time but sent the on-site security out to have a look.

"They went out straightaway, it was within minutes and there was no sign of anybody there or of anybody ever being there - it was really bizarre.

"I have no idea what it could have been but I didn't sleep the rest of the night and it gave me the shivers that's for sure.

"I've never believed in ghosts but I can't explain this. People have been saying its take but I can assure them it is 100 percent genuine.

"I wish it wasn't, as it has properly given me the creeps. I’ve never seen anything like it before.
“She’s leaning forward and seems to be floating, and is holding something in her hands.

"It’s the strangest thing I’ve seen in five years of looking after hundreds of sites like this.

"Imagine looking at this image when you’ve been woken up at two in the morning and are half asleep. It took my a while to drop off again after that.

“I did a bit of research to see if there had been any churches on the street. All I found was that it’s a really old street that’s been there hundreds of years."

The image has been shared tens of thousands of times since it was posted by web user Meglittle on Twitter.

She wrote: "So my dad's building site in Birmingham has a CCTV camera alert that flashes when there's movement and this morning it took this photo. Ten minutes later security went to check and found NOTHING."

Interesting photo, but again, the article didn't show the video and movement, just a screen cap. I'd like to see the movement to help determine whether it's a fleshie, hoax or something else

I'm far from knowledgable on photo manipulation but I can see  the lady has pixels around her like an aura and they're not present elsewhere, isn't tht a sign that she was "inserted"?

It could be. It may also be artifacts from the brightness of the 'figure'. Overall the quality of the photo is pixely and lousy so it's hard to tell much of anything.

I'll upload the image with some adjustments in Photoshop for those wishing to further scrutinize. I tried enlarging to 150% & 200% but the image lost clarity and sharpness. Instead I adjusted both the black and white levels and then further adjusting the global levels. These adjustments reduced the artifact around the bride. I did not manipulate the figure with the blur tool or a brush. In fact the pixilation around the figure virtually disappeared with minimal adjustments.

It’s quite possible the image was brightened before being published introducing additional artifact. 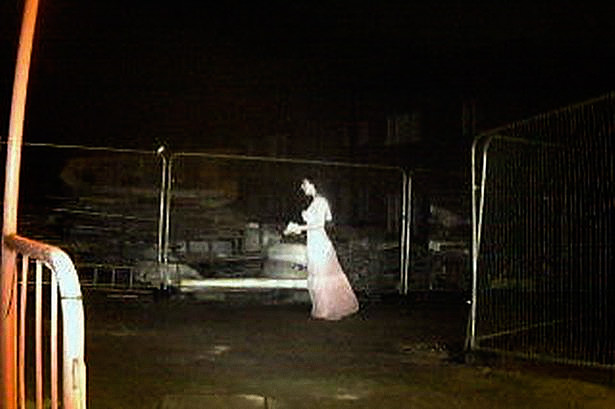 I don't believe this image was the result of Photoshop magic in regards to a pasting of the figure into the scene. The artifact is caused by a low resolution still image pulled from video footage. Digital sensors do not fare well with dark scenes especially when conditions have huge contrast as in the darkness and the illuminated white figure. Besides, with a fundamental knowledge of photoshop, one can easily clean up digital artifact.

CCTV video can become immense in file size when higher resolution is implemented along with higher frame rate. To save space, despite inexpensive terabyte mechanical HD's available, lower resolution captures are preferred especially when extended periods of time need to be recorded (overnight).

It’s an interesting picture but one must examine the interpretation in the article assigning the figure as a ghost. The pretense that after arriving within minutes of the image being caught on a CCTV and discovering nothing does not make it a spectral occurrence. It just means what was there wasn’t located. I’d really like to see the original footage. There was speculation of the figure floating. My eyes tell me, the dress has translucent characteristics and the legs & feet extend down to the ground. The footage would have revealed more if we saw a bobbing of the figure by her gait.In rebuttal, there have been accounts where a spectral figure looked like a real person, carried a conversation with another in a waiting room in a large hotel and literally disappeared from sight.

This incident would have been far more revealing if we saw how it appeared and disappeared within the viewing eye from the CCTV without any obstructions.

Nonetheless, I enjoy analyzing images, and as always love when people label a figure a “ghost” simply because they cannot figure an incident when presented with too many questions. Sometimes all it takes is be more investigative or more open to alternative explanations.
Thanks Klainey, we need food so the board doesn't starve.

I agree with EVP... seeing the raw footage could have been added much more detail and context.  Though the photo is interesting I'm not really sure I would assign it as being a ghost.  It would have made an excellent prank, particularly if the security folks weren't in on it.

There is some analytics from Hayley Stevenson https://hayleyisagho...ham-cctv-ghost/ :


"I can confirm that the ghostly figure in white mysteriously caught on CCTV is actually a living, breathing woman in a red dress caught on CCTV. You can see a different angle of the scene from below from a different camera. I’ll be writing more about this investigation in an upcoming article for a publication. Until then though, I think it’s fair to say… mystery: solved."

Yes, I thought that interesting too. I wish he would have posted the video. I believe he said it was "A drunken girl walking around with her friend  out of this pic.Sorry to spoil your fun".

Thanks for the insight! I'm not surprised at this at all. Welcome to GS by the way

Thanks a lot for the warm welcome Vlawde and KlaineyGstudy

I'm going to be a useful member, I promise. It's because my hobby is paranormal too (theory, not practice). Before I was a user on Belorussian ufocomm.ru forum and learnt from their research. It's weird but there are very few photos with some kind of ghost on them from the Russian speaking researching field: 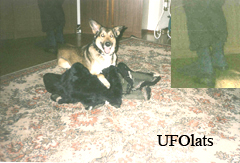 As you can see there is "weird body in the dark pants" behind the dog in the picture. The witness said she decided to take a picture of her dog and found some "extra stuff" which was not visible at that moment. The case happened in 2006 in Balozi, town in Latvia. By the way, the same witness also saw a ufo or a ball lightning approximately at the same time period.

Thanks a lot for the warm welcome Vlawde and KlaineyGstudy

I'm going to be a useful member, I promise. It's because my hobby is paranormal too (theory, not practice). Before I was a user on Belorussian ufocomm.ru forum and learnt from their research. It's weird but there are very few photos with some kind of ghost on them from the Russian speaking researching field:

As you can see there is "weird body in the dark pants" behind the dog in the picture. The witness said she decided to take a picture of her dog and found some "extra stuff" which was not visible at that moment. The case happened in 2006 in Balozi, town in Latvia. By the way, the same witness also saw a ufo or a ball lightning approximately at the same time period.

Interesting. In my experience, often I've seen 'sparks' as a precursor to paranormal activity. Not sure what I'm looking at in this photo, it looks like a mirror behind the dog. If so, the angle to photo was taken at may explain why we don't see the dog reflected, and the legs are a reflection of the photographer or someone else in the room. Photo is really small to make out much detail so just a guess

1) In my experience, often I've seen 'sparks' as a precursor to paranormal activity.

1) Yes, I can confirm the same effect. In the beginning I started to think there are vision problems but then I used IP camera and it showed those 'sparks' on video.
2) Photo is old (2005), but the researchers offered the photo negative for the analysis for all interested.
My goal was to share with you the Russian/Belorussian photo materials for fun and as a sign of my own incomprehension why so few ghost photos in those countries.

But instead ghosts in full height they got this type of evidence but the explanation is missing. It's explanable by the long-term denial of paranormal in USSR. But anyway there are 3 more photos (two are associated with the presence of  poltergeist and one is a random shot in the street in winter). Just for your entertainment, not for analysis: 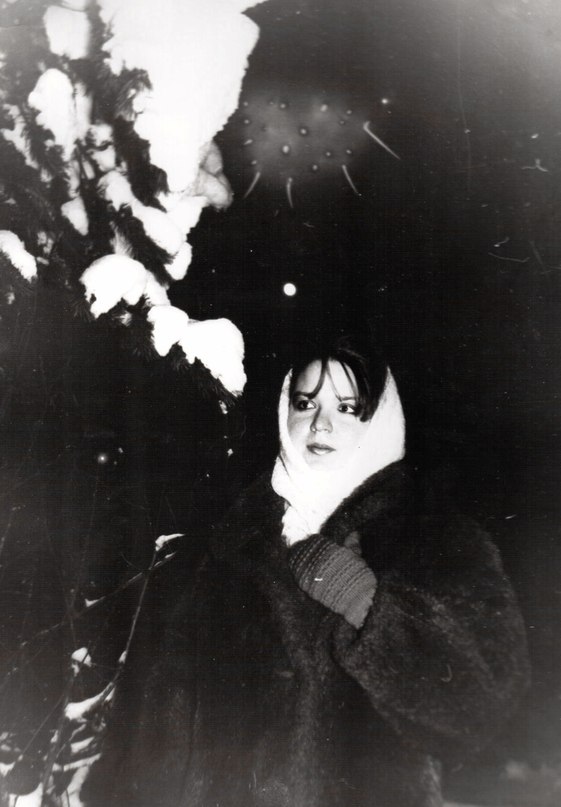 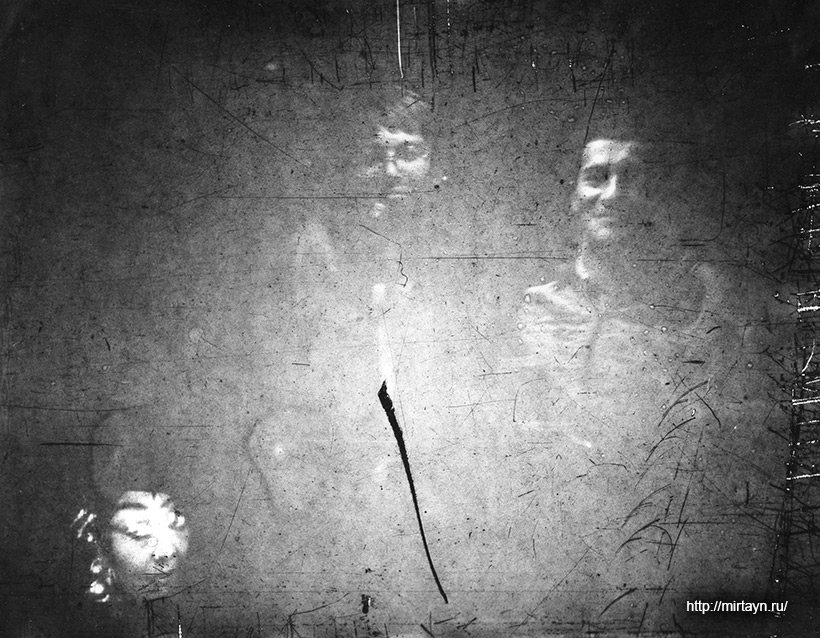 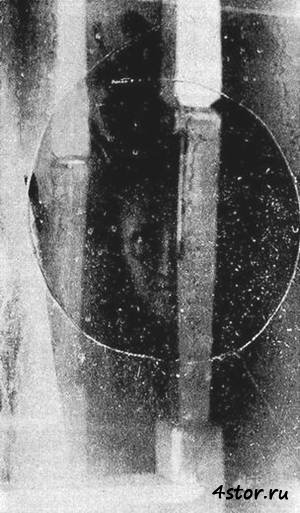