The Freaky Thing At The Musuem

So here's the Pic that I was talking about.  If  you Zoom on it, it looks like it was wearing a White Dress and has Feather's for Arms and a Gold Bonnet or something maybe.
One of my Friends suggested that it was a Demon but I'm not sure about that.  Of course I don't know that much about Demons and don't want to know lol.
Anyways hope you enjoy!
I use to be Kate24 I think on here a loonng time ago. I'm hoping to see some of the Regulars around.
Thanks and I hope everyone has a Happy Thanksgiving.
https://ibb.co/SwZ1yFj

It appears to be a small statue of an eagle or maybe an angel painted gold not sure.
I've slightly enhanced it for better viewing. 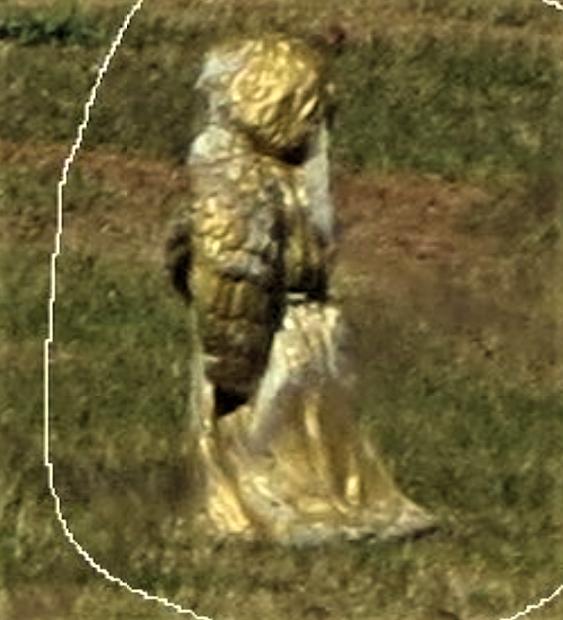 or maybe an angel painted gold not sure.

I'm going with an angel on this one so I agree with Kevin. I see the face in profile, blonde curled hair and a single wing.

Kate to help us, could you please post the other picture where you say it doesn't appear. Ideally, you would need the persepctive where the landmarks match up in position to this one or close to.

Hey guys, thanks for answering

.
I'll try to put up the other pic soon.  But, I'm sure it wasn't there and in that spot.  I don't remember seeing it when I took the pic.
And that's an Odd place for a Statue to me...I thought Statutes were usually beside the Headstone not in the middle of no where.
I'll try to post it soon though

Thanks again for responding so quick.

Looking at your photo it seems to be in a filed of marked graves, they are marked by plagues, and you can tell by the flags and flower vases the object is only about a foot or so tall.

To follow up further, two cemeteries are near the Museum of Appalachia being, Scruggs Cemetery & Norris Memorial Gardens Cemetery. Scruggs appears to be a much smaller plot buried in the woods whereas Norris seems to be on a very large piece of land with large separations between the burials. You can't zoom in a satisfactory level on Google earth Pro as no high resolution imagery has been recorded as of yet. What I can obtain visually, Norris seems to be filled with many very small markings consisting of vases, small statues and an abundance of footstones. A small number of headstones can be seen when zooming into ground level There are a few higher structures, likely cenotaphs, which were common commemorating those who died in the war. A supportive fact is found by looking at the date of passing of most in this memorial cemetery being in the 20th century.

Without another supportive image to validate the object in question it's fairly safe to say the structures are of mundane origins. This isn't a slight to Kate but 99% of the people in the world would find it VERY hard to remember details hours later by visiting this site only once. Our brains are just not trained to remember matters like this at this level.

It's also a natural reflex to experience cognitive bias when one doesn't remember a specific detail.

Trying google street view. Which cemetery was the photo taken in?

Vlawde,I'm not to sure. I never saw a name of it.

Has anyone tried 'Find a Grave'?

Yes, I have but without a name it is like looking for a needle in the haystack.

yup would take forever to locate!!

Thanks for sharing this. Update this topic if you take anymore photos.