62 replies to this topic

QUOTE
It was so heavy it had forced his stomach down between his hips.

A positive something is better than a negative anything

A man in love is incomplete until he has married..Then he's finished

I ate glue in Kindergarten, specifically the Clag Paste..Yum! 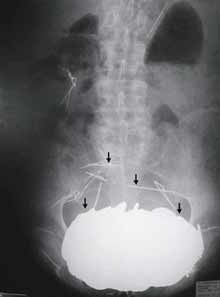 Doctors were awed when they took an X-ray. They discovered an enormous opaque mass in his stomach that turned out to weigh 12 pounds — as much as some bowling balls. It was so heavy it had forced his stomach down between his hips. The mass was 350 coins and jewellery.

Five days after his arrival, doctors cut him open and removed his badly damaged stomach with its contents. He died 12 days later from complications.

Oh, what a terrible condition to have. My sister inlaws granddaughter who is about 2 years old has been diagnosed with this condition. She pulled nearly 1/4 of her hair out and ate it.