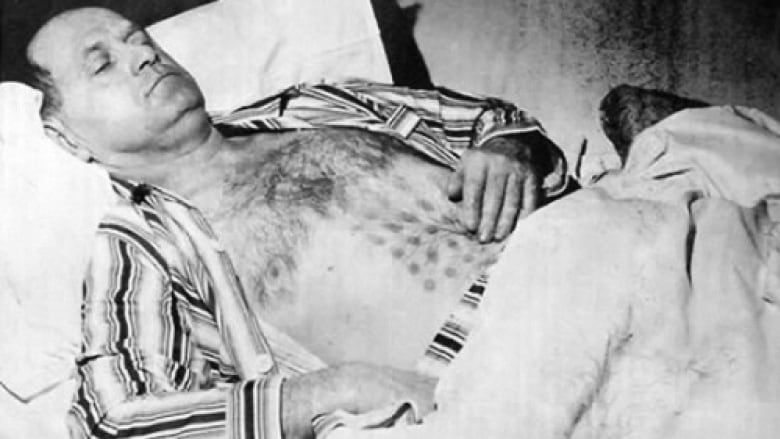 May 20th just before 11 pm 1967, 50 year old Stefan Michalak staggered  with the help of his then 19 year old son Mark into the Missouri Cordia Hospital in Winnipeg Canada.

Stefan was so physically weak that Mark literally had to carry him into the hospital!

Stefan was worried about explaining  how he sustained his injuries but his events would became world news! Saying he thought it was a Government secret testing craft. But his story would gain the attention of numerous U.S and Canadian government agencies who were very keen to interview Stefan, one-on-one to find out what he knew and in short what Stefan claimed was true or was it a hoax.

Stefan would later open himself and his family up to ridicule and skepticism.

There are some really interesting government documents I found about the case if anyone is interested here are some links.

What I'm wondering is...  if the radiation levels weren't a hazard to the public, how did Stefan get injured?  That's government for you...  Smh lol

What I'm wondering is...  if the radiation levels weren't a hazard to the public, how did Stefan get injured?  That's government for you...  Smh lol

That is where it could get into the conspiracy theory thing. I have read other accounts where the radiation was so high there was the recommendation to evacuate the area. There are accounts where Stefan was non compliant but in others it said he was so ill it took time for him to recover from this incident and regain his weight and health! He was able to get his hands on his health records.  I did try to find the info but I didn't have much success!  BUT I do drift back because I find it so interesting. If I come across it I will post!

So I just read that "conclusion" again and the whole thing does not make sense...  The levels of radiation were "not a hazard", but the soil samples "had to be "safely disposed of because of high levels of radiation".  I guess now since someone was affected, they decided something needed to be done.  Sounds like a big cover-up to me lol

Wow. Thanks for sharing.

Wow. Thanks for sharing.

You're very welcome, I like it when you can heard the facts for yourself! Just wish I could find the other information about how sick he was and how much weight he had lost! it was in the same format as a document to to case.

Interesting case. Not sure how much more this adds to what Klainey already posted, but it does show there is a book written about the incident and comments from his son
https://www.cbc.ca/n...rsary-1.4121639