77 replies to this topic

Not reallly, the timing is bad, but it's gonna get better.

Glad it will get better

I'm not sure how to play, but I'll give it a shot

LOL I have never played but googled

I'll play if it's not too late. 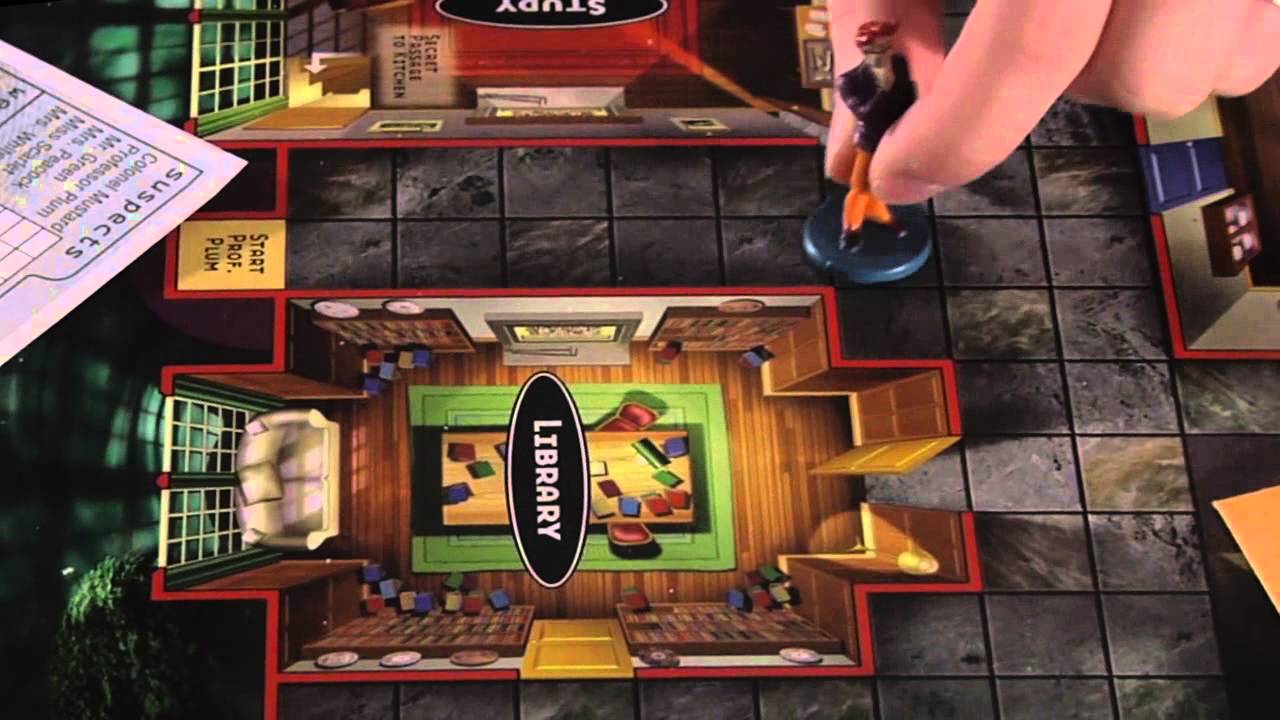 This game is now closed to players.

We have 3 players: MacC, Vlawde and, Jim

Hope it gets quicker LOL! 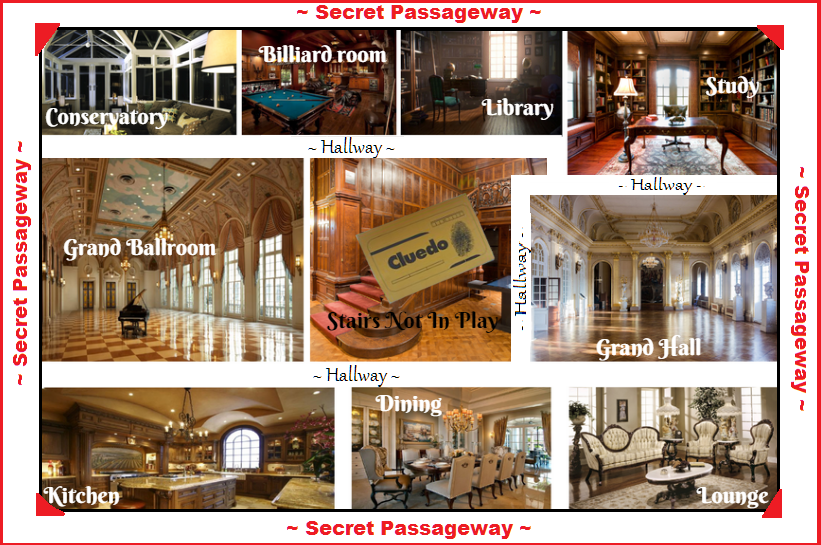 Players check your PMs from me with your cards.

MacC, you are playing first. Go into a room and make your accusation MacC put your answer in the thread so we can see it and follow along.

The 2nd player is Vlawde and 3rd Jim

Here, this might help us keep track of things. Dr. Black owns this beautiful mansion he has invited 6 guests (I think the guests have turned into zombies

) for  the week. However, blood is found around the mansion and the only person missing is the good old Dr. So the assumption is the Dr. has been murdered (and maybe eaten)!

It is your mission to find out: Before you become the next victim...the clock is ticking! 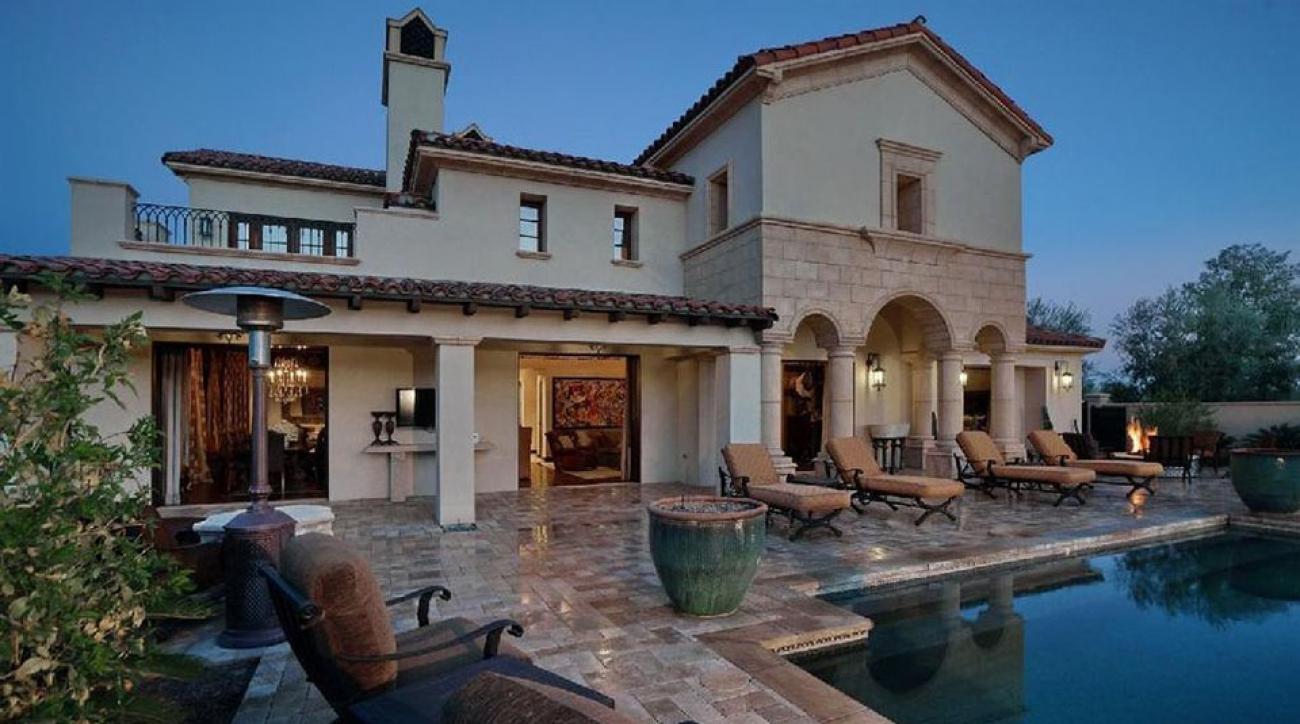 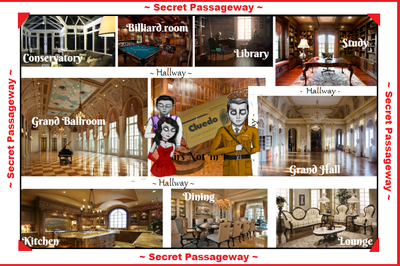 MacC, you are playing first. Go into a room and make your accusation   MacC, put your answer on the thread so we can see it and follow along.

The 2nd player is Vlawde and 3rd Jim

Unclear....what happens if someone has a card that someone else has? You PM them  that you have it, then  what happens?

Oh yeah, how do I use the scorecard thing?

Just click on the box in line next to your guess and mark it. I use an X on mine as my mark. It automatically saves what you mark.

I hope that makes sense.

So when it's your turn, you just go to a room and blindly guess the murderer and the weapon?

I guess I never had played Clue before, or if so it's been so long I forgot

Yes you all have 6 cards so they aren't in the envelope on the stair you need to guess what Mac and Jim might have in their cards. Will explain more it is 4 am here. Nite

Vlawde... probably best to just go online and read the rules to Clue.

MacC... I guess you can start us off since it's your turn.

As we note everything on our scorecard by keeping track of our cards and what we know from other players, we narrow it down to the right person, room and weapon. Then at some point a player makes an official informative guess. And if correct, that person wins the game... but if wrong the game is over, is that right? or is that person just out of the game? 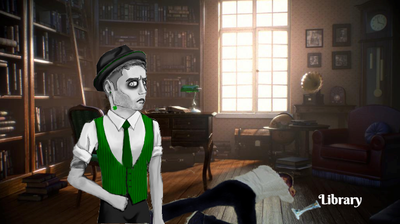 Ah, it's your turn, Vlawde. 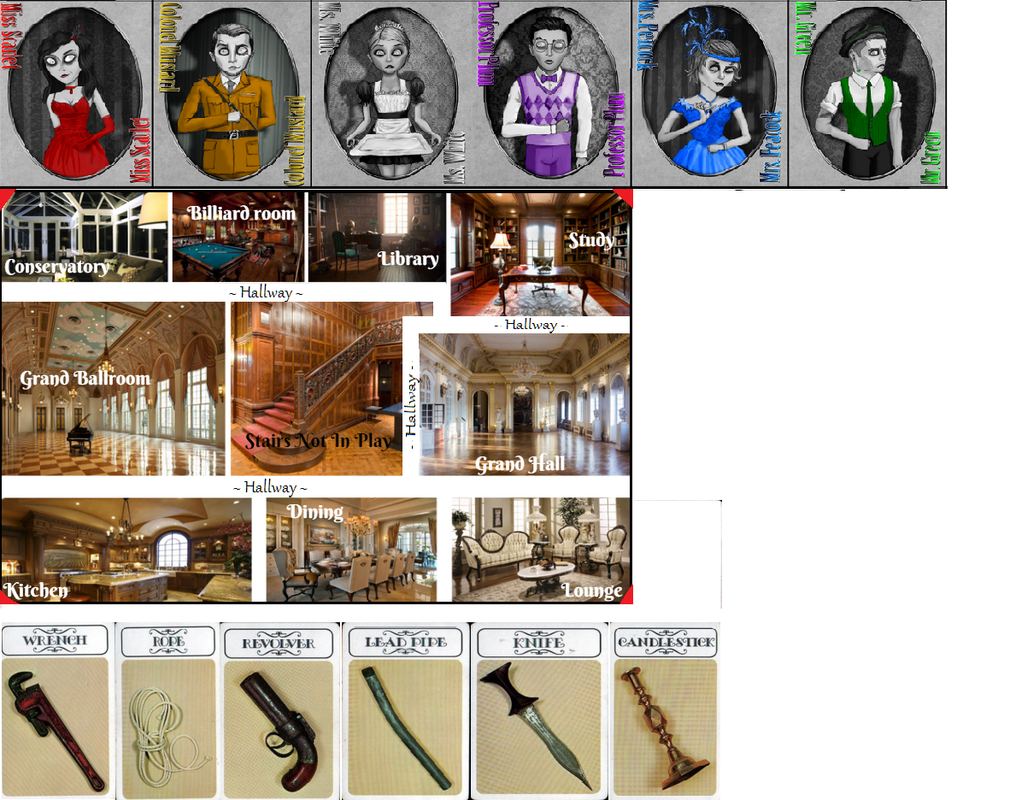 These are the 21 cards that are in play! 3 cards are sitting in an envelope on the stairs the other 18 are spread among the players.

For this game, there are 3 players who have 6 cards each.

The aim of the game is to guess what cards the other players are holding by process of elimination. By going into one of the rooms, you think another player might hold and making an accusation. However, there are no rules that say you can't use any of your own cards  (into the 3 card mix) to throw the other players off.

After player 1 (P1) makes their accusation of who they think did the deed. The next player, Player 2 (P2) checks their cards, P2 could have all the 3 accusation cards but they only have to reveal (1) card to P1  by sending a PM.

P1's turn would be completed. Now it is P2's turn to go into a room and follow the instructions given for P1.

If by any chance P2 doesn't have any of the accusation cards. P2 types "Pass" in the thread so P1 knows P3 can check their cards and P3 will follow the instructions given to P2. Then the play progresses to P2 to make their accusation etc.

At the end of each turn, the player can through the process of elimination,  make a final accusation by going to the stairs and tell the other player who they believe is 1. the suspect- 2. the room- and 3.the weapon.  But be careful, either way, that is the end of the game.

Vlawde I will go in and make some notes on your scorecard in the hopes it is easier to understand, and yes, I made it so you can edit the scorecard online so you can keep track of your game so no need to download.

If you have any of these accusation cards send the name of (1)  to MacC via PM and MacC's turn is over. Then it will be your turn to enter a room and make an accusation to Jim

I know it's not really such a hard game to play... but after reading all those instructions, i'm in a daze.

I guess my only question is, can I go to any room I want on my turn?

Klainey... maybe we should leave this thread up but start a new game on a separate topic and everyone just watches you and MacC play. you can even have me play too if it will help.   .........It's probably the best way for everyone else to learn at this point.

Back to The Funhouse