People Are In Love With This Robust Cat Who Has Very Specific Demands
August 17, 2018


To many, Bruno may seem like he’s from Mars.

The adorably weird cat, who is up for adoption, is in need of a human who can cater to his particular brand of quirk, according to a cute Facebook post by Wright Way Rescue, a not-for-profit no-kill animal shelter in Morton Grove, Illinois.


He also sure knows how to work the camera. 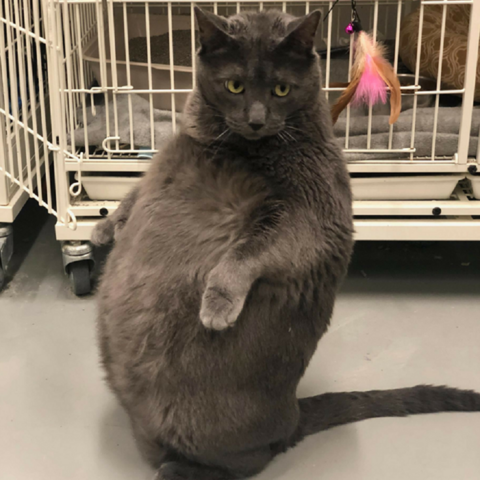 Bruno is a 7-year-old furball who is polydactyl, which means he has a few extra toes. He also has the kooky habit of standing on his hind legs, the shelter said on Facebook.

“This usually happens when I want food. No, my foster parents did not teach me this. They are not sure how I learned,” the post reads.

“We don’t believe it’s due to any medical issues,” a representative of the shelter told HuffPost. “Just a fun trick!”


The shelter also provided HuffPost with a video of Bruno doing his signature move.

The 25-pound cutie is also quite robust, which may be part of the reason why he was surrendered by his previous owner,  the shelter explained to HuffPost.

“Sadly he did not mesh well with their kids,” the rep said. “We believe because of his weight, he likely wouldn’t be able to scurry away quickly from commotion like cats of a healthy weight are able to do.”

Bruno, whom the shelter describes as a “lazy cat who just wants to be in the presence of my owners” is on a diet.

Yet, when it comes to playtime, only one toy will do.

“I also really like playing with my feather wand toy,” the post says. “Not so much my other toys or scratchers, though.”

And although his fuzzy belly may seem like to perfect place to pet him, the shelter advises against it. 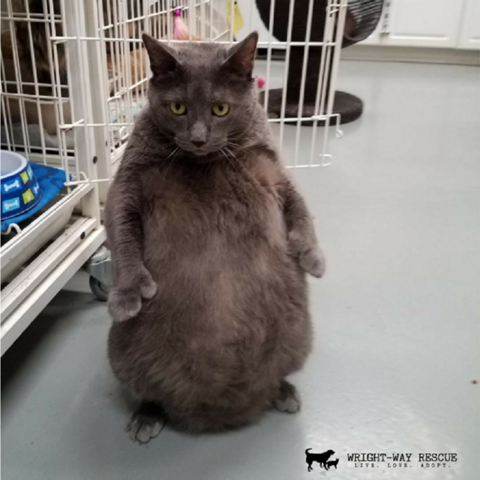 Wright Way Rescue Love on me.

“I like to be pet on the top of my head and spine only. I know my tummy is so tempting to touch, but I would prefer if you didn’t,” the post says. “I may swat my hand and pretend to bite if you do.”

He also needs a human who will be extremely attentive during mealtimes.

“It took my foster mom a little time to realize what I was meowing about, since she had just put food in my bowl,” the shelter said. “Soon she found out it’s because I want pets while I eats! I will still eat if you don’t pet me, but I will meow more and stare at you for a while.”

He’s fussy about his water as well — but his preference seems like it would lend to some stellar hydration.

“I never drink the water in the kitchen where my food is. I only drink the water that was put in a completely different room,” the shelter wrote. “If you have a larger house, perhaps put multiple bowls of water around for me and be sure to give me fresh water at least once day?” “Yes, I know I am EXTRA.”

But this particular habit may not be as high maintenance as one may think. It’s apparently fairly common for cats to not want to drink water if it’s near their food.

But good thing he’s keeping his whistle wet, because he’s also quite the conversationalist.

Ever since Wright Way Rescue posted about Bruno on Wednesday the furry penguin has gotten a ton of attention.

People on Twitter were also smitten by this kitten (OK, we know he’s not an actual kitten anymore, guys, just go with it. Let us live.) 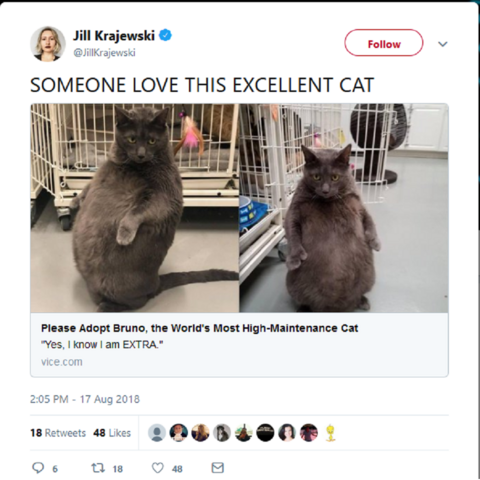 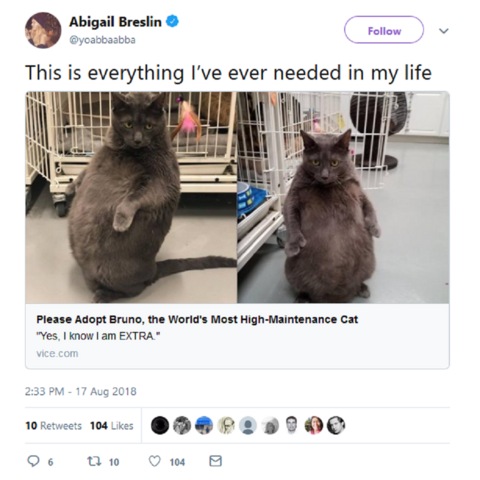 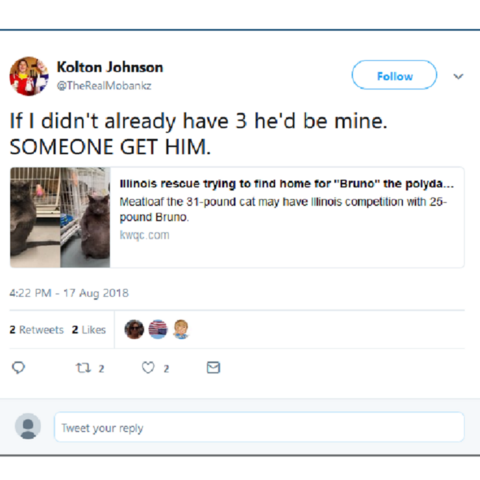 “He has been patiently waiting for a home since April, and, since this post, we have people all over the country wanting to adopt Bruno. With so much interest, we are taking the time to properly review applications to see which home Bruno would like the best.”

If I could, I would ask for him. Just seeing his photo's makes me want to reach through the screen and hug him.