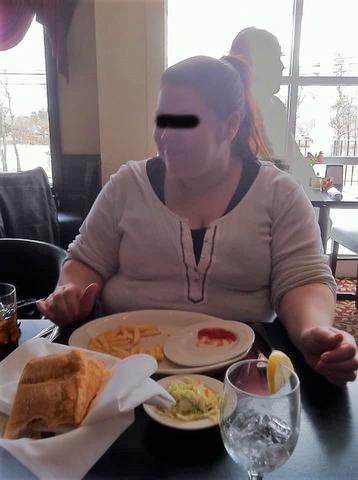 I came across this story on Fb, unfortunately, the image won't post forever (it must be a FB thing) but I thought it was worth looking at.

Here is the story:

I had waited a very long time to share this photo and this story. The first time I shared it, it touched so many lives on a deep and profound level, as I hope it does for you, today. For ages, humankind has been searching for proof that the paranormal is real. Proof that the soul survives death. Well, this is your proof, and it’s one heck of a story.

My best friend Lynn and I woke up early. It was cool, overcast, and smell of early spring was in the air. We packed the car with our newly purchased bicycles then set off on a road trip to bike the Cape Cod Canal. Road trips are standard fare for us and we have thousands of miles and memories under our belts. At the time, I was working as a psychic and medium and she spent most of the drive asking me for my psychic insight about her new relationship. It was Tuesday, March 29, 2011, and this experience rattled me so much I took a break from doing readings for 7 years.

After a wonderful bike ride, we decided to go for a late lunch at the Mezza Luna, a fantastic Italian restaurant. As soon as we walked into the building my psychic sense was on high alert. This happens a lot to me, so I shrugged it off and began reading over the menu. Once we began eating, my psychic sense was overloaded. “Something is here,” I thought to myself.

Psychically, I saw a man walk into the room right through the wall and sit down by the window. I immediately knew it was a ghost. “Lynn, can I take your picture?” I asked. “If you take a picture of me eating, I’ll kill you” she replied. “Sorry,” I said as I snapped the picture. I showed her the photo, and she was speechless.

Now, I have roamed haunted forests, graveyards, and homes snapping pictures, and from time to time I get something good, but not like this. When our server returned with the bill I pardoned myself for asking, “I know this is going to sound crazy, but are you aware of a haunting here?” She looked at me like I was crazy and before she could reply I added “I just took this picture and there is something in it by the window” I showed her the photo and she turned pale and her face lost expression. “Can I show this to the owner?” She asked. I said that he could come to see it, but I was not giving her my phone. She fetched the owner of the restaurant. He took one look at the photo and began to cry. “That’s Dad.” “That was his favorite spot to sit” He went into great detail about his relationship with his father, and how much he needed to see him again. He asked for a copy of the photo and, of course, I sent it.

Time went by and I got a call from him. A prominent New England magazine wanted to use the photo and wrote a story on it. Of course, I gave permission. A copy of that article and the photo hanging in the lobby of the Mezza Luna to this day.

That experience changed me, and it haunts me in a way. After a lot of soul searching, I started doing readings again, and I’m happy that I did.

I hope this photo and story stirs something within you at the crossroads of wonder and belief. I hope that you will share this and it will find its way to whoever might need the possibility of proof of life after death, and the comfort found within.

Not too sure the souce link will work as it is a closed Fb group! But I have included it.

Mezza Luna I think this would be the father????

What are your thoughts?

I don't believe there is enough information revealed besides an interesting story. My first question would be, can anyone else validate someone wasn't physically sitting at the window table? I did not see that included in the story. Secondly, it sounds like confirmation bias when someone identifies a relative to an absolute purely by a silhouette. She's already preconditioning herself noticing she had a psychic sensation prior.

As to the conditions being early spring, it would be more accurate to say late winter at best. There's a noticeable amount of snow on the ground and clinging to the trees creating an enormous amount of backlight through reflection.

As far as camera settings, I would suspect by the story, the image was taken with a cell phone. Cameras do not see light as efficiently as the human eye. Our eyes can see 10-14 stops of light normally whereas compact cameras/cellphones only half of that and even less with a cellphone. The cellphone is attempting to focus and expose properly to the friend sitting on the other of the table. The restaurant is shielding most of the light outside and the subject is "back-lit" creating a partial silhouette. I say partial because the light streaming through the window is clipping the white channel. There is virtually no detail outside because the exposure is almost completely blown out. You cannot bring back detail once it clips the white channel to that level. The light is so overpowering it's clipping the silhouette.

It's only fair to have more of the story included. Did anyone go further to validate there wasn't a person sitting at the window table at the time time the image was made? How long after did the owner see the image? Did her friend turn around and see no one sitting there immediately after the image was shot?

Still an interesting story but it's not a haunting either. By definition, a haunting is a reoccurring paranormal event (not necessarily the same) that disrupt human activity. A one time event is not classified as such. I've only seen a paranormal figure once in 60 years. This was a collective experience. Without someone else witnessing, I'd be looking for a mundane explanation such as a hallucination. I've had several of those. Your mileage obviously varies.

Ghost stories can sometimes attract the curious. I see the story is linked to a restaurant. Pretty common along with haunted hotels, bed and breakfast. Good for business

Thanks for the share Klainey. It opens the valve for discussion.

No, I think there will only be the information I have already given.

I did try to see if I could find the article in the magazine the story talks about, but alas, no such luck!

There is some weird going on in the windows.
I wonder whats causing the vertical white area that I can see in the windows, it even blocks out the power lines and fence.

Oh I figured it out. Its actually a post.

There is some weird going on in the windows.
I wonder what's causing the vertical white area that I can see in the windows, it even blocks out the power lines and fence.

Oh I figured it out. It's actually a post.

I am laughing because they were my thoughts too! And I didn't realise there was snow outside!

I think this is the father

I'd say it has to do with the bright light coming in from the windows versus the darker interior of the restaurant. Camera is having trouble reconciling the 2, which is why the man behind her has a translucent look. You can also see an artifact or shadow of the women's ponytail

I'd say it has to do with the bright light coming in from the windows versus the darker interior of the restaurant. Camera is having trouble reconciling the 2, which is why the man behind her has a translucent look. You can also see an artifact or shadow of the women's ponytail

He's partially transparent because he's moved. Longer exposures can capture that. Everyone inside is overly backlit from the outdoor light.

I can see the man's shadow on the window stile. I played with the image, I don't know if this would help, but here they are. 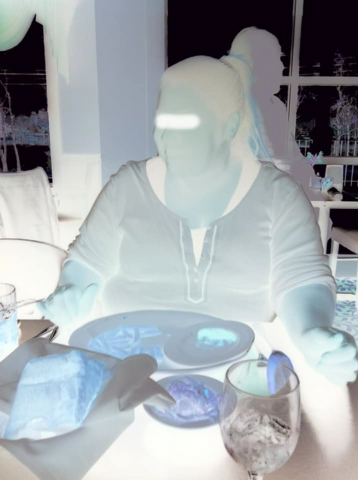 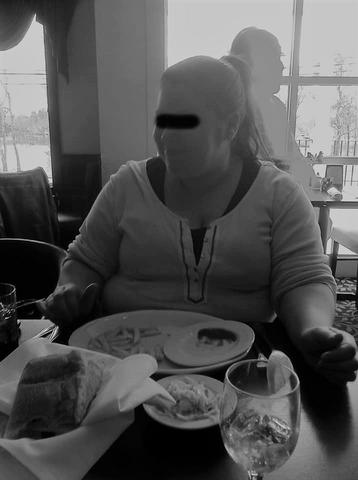 I am not sure what you mean MacC. Is it the shadow above his head on the stile?

Can sun flares or light reflections blend into or go behind objects around it like trees and bushes? I'm still a newb at photography and this shot I took at an unnamed lake in Yosemite National Park near Olmsted Point baffles me. We were the only ones in the area and not on or near popular trails, just exploring the wilderness.
When I looked up sun flares I couldn't find anything that resembled my image, they are always in front of things or going towards the lens but never behind objects. I'm still convinced its a flare because its in the direction of the sun but am I missing something here? I guess it's the way it looks up close or zoomed in that weirds me out. It doesn't look like the usual flares I see.....
Tell me what you think

I'd be happy to know that my family and I weren't being stalked by some weird blue paranormal entity in an area known to have high paranormal activity. The stories I've heard from the old timer locals would chill your bones.

It may be because the light is hitting a spot on the lens. Here's some good info on lens flare that may help

Can sun flares or light reflections blend into or go behind objects around it like trees and bushes?

It's light that finds it way through the front element of the lens and bounces inside through several more elements contained in the barrel before it gets to the sensor. It can come from the sun or an object that is capable of reflecting light. Flares and reflections are handled by a lens hood and/or filters such as a circular polarizer. 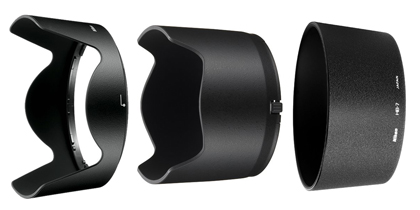 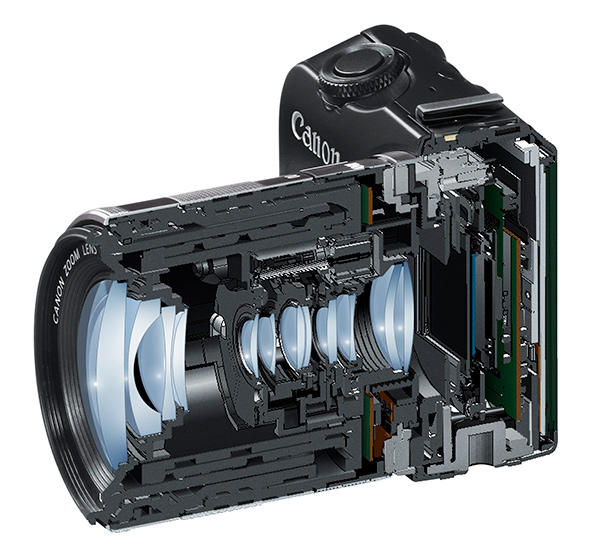 I am not sure what you mean MacC. Is it the shadow above his head on the stile?

Sorry, I didn't mean shadow, I meant highlighted by the sun. Here's the highlighted spot. 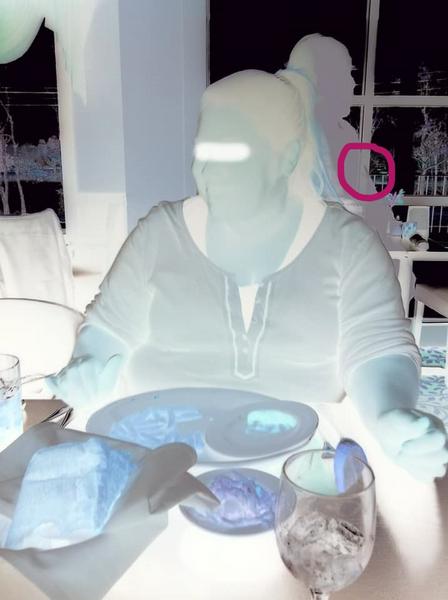