Those that have been here awhile have seen some of my posts and know that the cleaning crew and security guards here at my work have had odd experiences or strange feelings in certain buildings or specific floors in one building.  Turnover has been high lately with our security guards...due to mostly low pay for the job.  I have met and talked to all the new guards individually.

ALL of them have repeated the same general statement.  They do not like doing rounds at night in the corporate building and the top 2 floors in my building.  They think they hear someone typing or other sounds.  No one is there.  They feel like they are being watched or followed.  They all said they do rounds as fast as possible in those locations to just get out of there.

I cant wait for them to work in the control room and see badge readers going off in the middle of the night and no one is at the door :-).  All secured doors have a camera on them and immediately turn on that camera for the control room when a badge reader has a badge put next to it.  Those security guards that have been here awhile have told me about it often.  There are cameras on the elevators too.  The control room gets notification for elevator activity after hours as well.  Elevator buttons seem to get pushed in the middle of the night occasionally too.

To my knowledge, no one has ever seen anything that had manifested on camera or in person.  The only physical thing ever seen here was a door leading out of a cubicle area going to the loading docks opened up by itself in the middle of the night.  One camera inside the building could see the bottom of the door (not the push bar in the middle of the door to open it).  Another camera outside in the loading dock can see the whole door clearly.  The locked door (which has an alarm on it if it is not latched shut or left open too long) could be seen opening all the way and then closing again.  Security had to go check the door and found it was latched shut.  They had to fill out a service request for facilities to check the door latch mechanism for a failure.  Facilities came back with no problem found.

Lou forgive me if I have already asked this. The hotspots you outlined in your detailed summary of your workplace, can you share any information as in history of the building? Not that it always offers a connection but it is still a good starting point to figure out why there might be activity. Thanks in advance.

Lou forgive me if I have already asked this. The hotspots you outlined in your detailed summary of your workplace, can you share any information as in history of the building? Not that it always offers a connection but it is still a good starting point to figure out why there might be activity. Thanks in advance.

The location of our work campus had been just typical Texas hill country on the edge of Austin.  Construction started in late 2006 and opened for us to move in June of 2008.  There was no previous structures on the land of any type.  To my knowledge, no one died during the construction of the campus.  Given there were no previous structures on the land, it is impossible to say no one died on this land at some point.

The most amazing part of it is all the security guards have said the same thing.  All of building 100 and the top 2 floors (3rd and 4th) of building 200.  They have made comments about the lab I work in is a little creepy.  But, they said it was likely to all the computers running scripts and such and rebooting over and over all night long.  I only work on the 2nd floor and y'all have read my posts about some of the stuff that I have experienced in the lab over the years.

Thanks for your detailed information. Just ruling things out Lou, but I wouldn't be surprised considering your workplace, a massive EMF field may be responsible from all the computer terminals. AC & DC fields have been known to at the very least create the sensation of being watched.

One of the teams first investigations came from an established Inn in Massachusetts. A particular room was said to have lots of activity that we stayed in overnight. We ended up venturing out into the hallways when we discovered the IR lights that surrounded the cam sensor, was picking up an abundance of dust particulate in the air. The long hallways were provisioned with emergency lighting stations every thirty feet. One of our investigators was extremely EM sensitive and continued to complain about being watched as we made our rounds down the first hallway.

Our equipment manager returned to our room and came back with an AC EMF meter to see if there might be a correlation with the other investigators feelings of being watched. 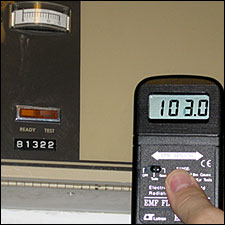 The Environmental Protection Agency recommends readings of 0.5 mG to 2.5 mG to be safe. These emergency lighting stations were producing over 100 mG at a one foot distance. Our human EMF meter would always experience the ill feelings as he approached the stations and they would only subside when adequately distanced.

High EMF fields can come from various sources such as microwaves, smartphones, cell towers, electrical appliances but more importantly in your case computers & the associated peripherals. Even an inexpensive non-shielded alarm clock can produce unusual effects over the course of the night. I've recommended moving them to clients that have strange visitations while sleeping. A number of clients had the symptoms subside or completely disappear after the re-location.

The only way to test this would obviously with an AC and or DC EMF meter. If the test remains inconclusive further investigation would obviously be in order. I'm not suggesting the security guards aren't experiencing any profound sensations. I'm merely pointing out that the root cause to some of the events that have taken place might have a much simpler explanation.

A good reason to have all electrical devices, including cell phones, turned off...one of the reasons many teams go 'lights out", so the only devices 'on' are the investigative tools, which can still provide false positives

A good reason to have all electrical devices, including cell phones, turned off...one of the reasons many teams go 'lights out", so the only devices 'on' are the investigative tools, which can still provide false positives

That is a standard practice for us whenever possible. A written/signed requirement during investigations is for all investigators to completely shutdown all cellphones. We periodically take breaks where usage is  allowed. Cellphones remain shut off otherwise, even when silent, they cycle with the nearby cell towers which creates a false positive.

The custodian supervisor hired a new woman and she started yesterday.  The new custodian is deaf and will not be bothered by strange sounds in / around the building.  Then I wondered if this woman might be more "sensitive" to any other feeling that she may encounter while working here.

Sadly,  I dont know sign language and dont know if I would ever be able to communicate well enough to ask her.

Write down on a piece of paper explaining you don't know sign language and giving her a brief rundown of the goings-on there. Then ask if she'd be willing to answer a few questions, about whether she's seen or felt anything off. If she agrees, write down your questions and have her write down her answers.

well if they weren't scared before they will be now! hahaha